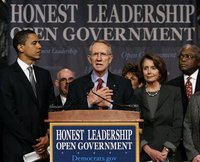 Democrat senator Harry Reid announced Monday he is amending his ethics reports to correct where he deliberately failed to account for a land deal that allowed him to collect $1.1 million for property he hadn't personally owned for three years.

It must be nice to be able to just change reports once you're caught lying on them. Politicians on both sides just make rules to cover their butts rather than hold themselves accountable. They are the most reprehensible animals on the planet and Harry is one of the most vile among them. Read this at the New York Post.

Of course Reid is blaming Republicans for his own lack of integrity being exposed and says he is amending the report because, "I believe in ensuring all facts come to light." Sure, Harry, you're just a political paragon of virtue. Read the hypocrites full statement here and wear hip boots.

And if Harry is so honest and truthful, why has he been using campaign donations instead of his personal money to pay Christmas bonuses for the support staff at the Ritz-Carlton where he lives. Federal election law bars candidates from converting political donations for personal use. And why is he only now personally reimbursing his campaign for $3,300 in donations he had directed to the staff holiday fund at his residence.

This guy is as crooked as they come. Let's not forget he accepted free ringside tickets from the Nevada Athletic Commission to three professional boxing matches while that state agency was trying to influence him on federal regulation of boxing. Read more here and here. Then he claimed he "misstated" (read lied) the ethics rules about accepting gratuities.

And this is the guy who had the nerve to say he would support a filibuster of the nomination of Judge Alito and broke the unwritten rule about not criticizing the president when he is overseas.

Hypocrite Harry is a fitting symbol for the rabid donks. Bray away Harry!

If you want more info on Reid's corruption and lack of ethics check these out:

Las Vegas Review-Journal
Posted by BobG at 4:36 AM