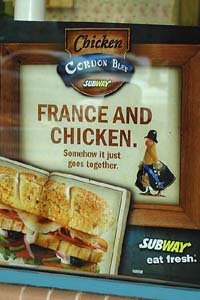 What were the odds?


France's prime minister said Thursday that military action is not the solution to the international standoff over Iran's nuclear program.

French Prime Minister Dominique de Villepin said the war in Iraq should serve as a warning against attacking Iran.

"My conviction is that military action is not the solution," Villepin said.

He's right, it never has worked out well for the Frenchies. That's ok, Dominique, inique, inique. Keep singing songs of surrender. It's music to the Muslim madmen. Soon they will be using the eiffel tower for a minaret, Monsieur Dhimminique.

The US and Israel can pull the fat out of the fire for you despite your anti-Semitic attitude, but, if you'll pardon the expression, the chickens are still coming home to roost.