Tancredo Has The President's Number 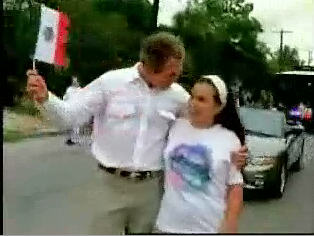 According to NewsMax, Representative Tom Tancredo says that if President Bush announces a plan to deploy the National Guard along the U.S.-Mexican border in his speech to the nation Monday night, he'll support it.

"We train National Guard all over the country, and there is no reason why we shouldn't be conducting that training on our borders," Tancredo told ABC News. "Really, we are not trying to take them from other places where they are needed."

But he remains skeptical on whether the White House will follow through.

"I hate to be too cynical about this, but my guess is it is simply being done to influence the debate in the Senate and in the House on the immigration package," Tancredo told Knight Ridder news on Friday. "And once the debate is over, we'll go back to business as usual.

The Colorado Republican said he fears that Bush is merely "is hoping to take the argument off the table that we're not doing enough on the enforcement side so that they can get the bill passed giving him an amnesty/guest-worker plan, and that will be the last you hear about securing the borders."

Tancredo has been at odds with the White House for years over the immigration issue. After a now legendary meeting in 2001 with top Bush advisor Karl Rove, where he warned that Bush was making a mistake by ignoring illegal immigration,Tancredo said he was told he'd never be invited back to the White House again.

The way this White House is being run, I would take that as a compliment. I believe Tancredo's fears are justified and I will be astounded if they aren't realized. This is nothing more than a brazen attempt to negate the will of the American people by Senors Bush and Rove. I hope Tancredo and the other patriots of the House tell the President and the Senate to take their amnesty and go to hell.