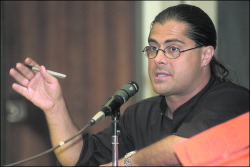 The Dallas News reports that the Farmers Branch City Council, on Monday, will vote on whether to make English the city's official language, enroll police officers in a federal training program that will essentially make them immigration officials, and enact an ordinance to prohibit landlords from renting to illegal immigrants. Local laws like this are being passed around the country because the Federal government continues to be derelict in its duty to enforce existing laws.

Here in Arizona, voters just passed four propositions that deny bail to illegal immigrants charged with serious felonies; block illegal immigrants from obtaining punitive damages in lawsuits; prevent them from benefiting from state-subsidized programs for adult education, child care and other services; and make English the state's official language. It sure doesn't sound like the public is in favor of the Bush amnesty and John McCain's banana.

But, wait here comes the ACLUnatics! Will Harrell, executive director of the ACLU of Texas has teamed his demon legion with the Mexican American Legal Defense Fund and The League of United Latin American Citizens. Notice how these groups identify themselves as Americans, but take the side of aliens breaking American law.Their allegiance is completely based on ethnicity and is as racist as any Klan gathering. And, just like all other racists, intimidation is the weapon as Harrell threatens the elected city government with hundreds of thousands of dollars in court costs. Even the mayor's home was vandalized this month when someone spray-painted "Viva Mexicos" on his house. Yes, this what what the tolerance loving liberals unleash in their quest for unbridled power over the majority of American citizens.

Harrell then has the nerve to call others bigots. "My understanding is that some bigots on the City Council in Farmers Branch are fiscal conservatives. ... We hope whatever moves them, that reason will prevail," he said. "We fully anticipate, frankly, that their lawyers – without even getting into what their ideological perspective is – will tell them you simply cannot do this in a way that will not wind up in court."

Hopefully, if it goes to court it will wind up in defeat for Harrell and his pack of racist jackals. Give 'em hell Texas, it's where they belong.