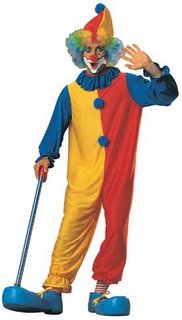 John Kerry not only lies to others, he lies to himself as well. On Sunday, he stated his "botched joke" that intimated if you're uneducated and/or stupid you could wind up in the military, would not undermine his White house bid in 2008.

Kerry said he decided to keep a low profile at the end of the last election.

"Since we had very close races, I made the decision to make certain that I didn't distract. The results speak for themselves," he said. Of course John, in your mind the Donks did well because of your actions when, in truth, they succeeded in spite of your bufoonishness.

"Not in the least," Kerry, the clown, said when asked if the uproar over his comment had caused him to reconsider his 2008 run. "The parlor game of who's up, who's down, today or tomorrow, if I listened to that stuff, I would never have won the nomination."

Then he donned his wig, big red nose, baggy pants and oversized shoes, climbed into the tiny car with a dozen other Donks and they drove out of the big Democrat tent as the calliope music crescendoed.