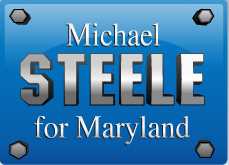 You have to like Maryland Lt. Gov. Michael Steele. NewsMax describes how he slammed The Washington Post editorial board for its "ignorance" during a Sunday appearance on Fox News Channel. The man is certainly articulate and knows how to cut to the chase.

Speaking to Fox News Sunday host Chris Wallace, Steele took on the Post for its characterization in an editorial of the black GOP candidate as not having "command of the issues." Steele was quick with a reply.

" ... that is pitiful," Steele said. "It is absolutely pitiful, and that's nothing more than what the Baltimore Sun said about me four years ago, that I bring nothing to the table but the color of my skin. They were just a little bit more sophisticated in their ignorance.

They're a bunch of folks, as I told them in the interview, who sit in an ivory tower, who have no clue what real life is about out here. It's easy to pontificate when you don't have to put a vote on the line, when you don't have to look a voter in the eye and let them know what you really think, so what — they come after me. "Now, how many times very you seen the Washington Post do a second editorial on a candidate that they didn't even endorse? It makes no sense. So clearly, I must be winning this race, and the Washington Post will have to write that headline, "Steele Wins", and then eat it."

I hope, for the country's, sake he's right.