The King Who Would Be God 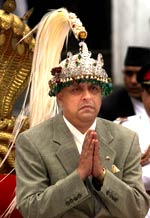 King Gyanendra of Nepal has been branded a criminal and Nepal’s prime minister has hinted that criminal charges are possible.

A government commission has found him responsible for a brutal crackdown on the protesters who forced him to give up direct rule in April. He has since been stripped of his powers, command over the army, and immunity from prosecution.

The king of Nepal is traditionally regarded as an incarnation of the Hindu God Vishnu, but Maoist rebels are pushing for the 240-year-old monarchy to be abolished.

In 2004 Gyanendra said “On the living-god thing, let me interpret it this way: we were given the personification of Vishnu. But I’m a pragmatic person. I’ve never said I’m God” How right he was or we might be seeing God in the dock.

Hat tip Times On Line and The Columbus Dispatch.